Augmented reality and virtual reality, what future for marketing?

While digital allows not only providing information in 2D and 2D on users’ fixed or portable screens (augmented reality), technologies become widely available that enables drawing deep into a virtual world: with such accessories as the Oculus Rift (available in cardboard for less than 3 euros), the PlayStation VR or the HTC Vive, it is now possible to live in a virtual world and thus to test a thing that you has not bought yet.

The Press being on the top line with New York Times-Google partnership
At the times of twitter being at the heart of info does no longer mean to be just precise, analytical and ultra-responsive. Due to partnership with Google (and the proposal to use the famous cardboard), the New York Times is a step ahead of other post or web TV channels with its short films proposal that put you in the heart American first nights or suggests you to go to New York with the well-known artist JR. An inventive format remaining the great encyclopedic virtual project launched by the Google Cultural Institute with large concert halls, ballet, shows and museums all around the world (read the article of Toute La Culture: http://toutelaculture.com/actu/politique-culturelle/linstitut-culturel-google-lance-sa-section-des-a…).

Ikea enables selecting its furniture by virtual reality
The world No. 1 in furniture (and many other things) has launched an augmented reality application that enables people moving 360 degrees in space and adding the furniture of their choice without any device (see explanation on the site of the Nordic giant: http://www.ikea.com/ms/fr_FR/france/appli_catalogue_2015.html). In partnership with Valve video games and HTC Vive headsets the brand also offers a virtual reality application. The idea is to choose from three kitchen models and change everything. A way to imagine own interior well-orchestrated by the brand. 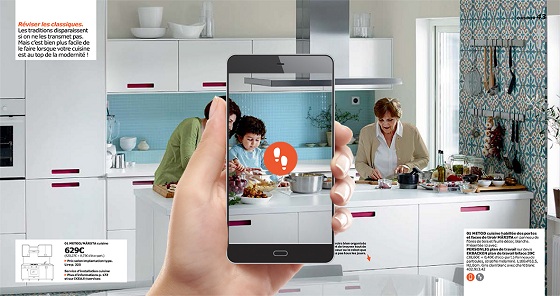 Volvo road-trip
The car brand suggests considering their car XC 90 driving as a pleasant car trip through the prism of famous and very cheap Google Cardboard. A nice moment when the engine humming in nature and that makes us imagine the possibilities that virtual reality opens to us regarding everything related to marketing in the area of tourism, travel or movement.