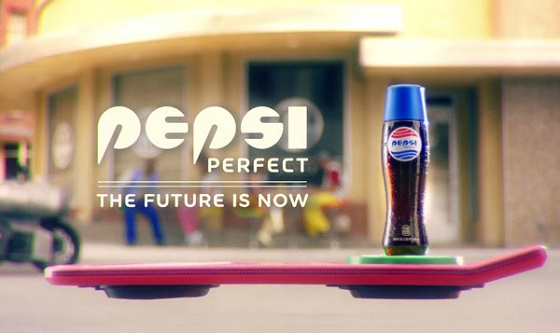 This Wednesday, October 21, the 30th anniversary of the first part of the cult trilogy Back to the Future resulted in a some deliciously regressive hysteria worldwide. In Paris, the film was re-released in theaters; there was celebration and VHS projection at le Comptoir Général and a musical at Rex with real circulation of the legendary DeLorean in Paris (photos taken by the agency). To make the buzz, big brands have paid homage to the first product placement monument with a stream of reproduction of objects used in the film: Pepsi, Nike, Pizza Hut and many car brands. As usual, En3mots offers to discover this strong marketing trend through the angle of the digital.
The effect of announcement perfectly animated by Nike
After brief recreation of fetish McFly’s shoes in 2011 and sell of the original pair at auction for a noble cause in September 2015, Nike has benefited from the date of October 21, 2015 (the date McFly character landed in the episode 2) to announce the coming of an ephemeral and limited collection of Nike Air Mag in spring 2016. Lack of test product, the announcement effect made real buzz through compelling long-awaited animated gifs godasses that must still, after 30 years, have the superpower to self-lacing, especially on twitter or retwitts (14k) and the stars of satisfaction ( 12k ) exploded !

A limited collection for Pepsi
Pepsi probably succeeded where Nike has extended the deadline: to release a limited edition of its bottles of Pepsi perfect. In addition to 500 copies distributed free of charge by epigone of Marty McFly in NYC comic con, 5000 bottles of this ephemeral collection were offered for sale at astronomical and symbolic price of 20,15 dollars. Besides the buzz created by the scarcity, the operation affects the canvas where geeks and fans of the series have to bide web territories, in a nice digital treasure hunt that necessarily includes contests on brand’s social network. The draw on the page facebook of Pepsi France was held on October 23.

To put forward the Mirai, its hydrogen car model in the US market, the world No.1 in automotive market, Toyota USA has decided to ride the crest of coming back to “Back to the Future” and to remunerate two actors of the film for a pajamas teaser around a “dinner” table. With just a few rides for more than 30 years, Michael J. Fox and Christopher Lloyd announced in a teaser (3.5 million views on youtube) a voluntarily advertising spot lambda that we discovered on October 21 (3.5 million views as well!). Yes, in 1985 we all believed that the future would be Japanese …

Even if the film fails to predict the Web, #RetourVersleFutur is surely the hashtag of the week.