The En3mots review: buzz and brands to discover this week of March 17

Buzz Experience of Barack Obama
Master of Buzz, the U.S. President has ventured Tuesday, March 11, 2014 with enthusiasm on the talk show panel “Between Two Ferns” that is 100% broadcasted on the web on the site Funny Or Die to incite the youth people to register themselves via Healthcare.gov to medical insurance program adopted by him. Face to face in his hotel with the comedian of Very Bad Trip Zach Galifianakis, U.S. President held for 6 minutes a pure performance of rebuff where he revealed step by step a bluffing relaxation. Total? 11 million views but “only” 19,000 connections on the website of Obamacare.

Numericable-SFR takeover , what are the consequences?
This is the front-page of all newspapers since Friday, March 14 that Bouygues has been excluded from repurchasing and this is Altice, the parent company of Numericable that enters into exclusive negotiations with SFR, upsets panorama of French telecoms. If nothing is yet decided, Altice has doubled Bouygues with a proposal of € 11.5 billion to Vivendi, which would retain 32 % of shares. While the merging Bouygues / SFR would give rise to a super operator with 43% market share, Numericable itself is not present among French mobile telephone networks. So nothing changes with regard to 4 major operators (SFR, Bouygues, Orange and Free), and this acquisition will not enter into conflict with the Competition Authority. However, once united, Numericable and SFR will become a giant of optic fiber, Numericable being a leader in this field: even if its material is more dated than that of Orange, its fibers connect 3.48 million homes in France. As for SFR, it has 5.2 million ADSL connected subscribers. The merging of two entities would thus create a European behemoth of high and very high speed broadband.

LECLERC replaces the prospectus by the digital
This is since 2010 that LECLERC announces its objective “zero prospectus” by 2020. One more step was made in this direction with large scale test in September and October. LECLERC tried to replace the old paper prospectus by the widely digital equipment. With a budget of € 400,000, the operation lasted two weeks in 560 major surfaces of Leclerc group. They suggested to customers to scan products and discounts on minimalist prospectus with considerably reduced volume. The operation, which was supported by a dedicated website and social networks of the group, appealed to all customers and aimed for maximum traceability. The results seem to be conclusive! 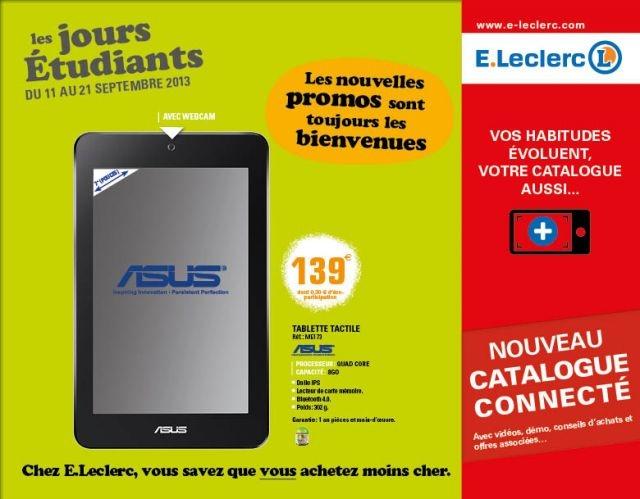