The En3mots review: buzz and brands to discover this week of 20 January 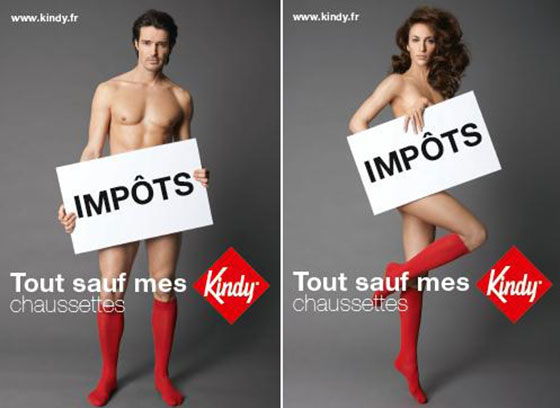 1) Buzz: taxes are anything but red socks Kindy

Bouncing with humor on the announced increase in various taxes in the beginning of 2014, the sock brand Kindy managed to make a buzz with taxes! The campaign “Everything except for my socks” launched this Tuesday, January, 21 in our Parisian metro can leave no one indifferent: a Barbie and Ken-like man or woman wear only their red socks. A catching detail? A fig leaf cardboard of a homeless where is written “taxes”. A beautiful lesson of bounced on a recurring news …

2) Adidas managed a master stroke with the new edition of Stan Smith
Stopped for 2 years and a half, the cult model of 1970s and 1980s was relaunched with great pomp last week. From May 2011, Stan Smith was no longer produced. And found a quick sale on E-bay & Bon coin…. Two years later, Adidas has made a subtle effect of the announcement on his Twitter account: yes, nostalgic forty-year-old companion from their college years would be reissued!

It was only in December 2013 that the brand has sent the concrete with a movie trailer  where one find of course Stan Smith, but also actors Will Arnett, Max Greenfield and Ana Girardot, tennis star Andy Murray, singers Sky Ferreira aetMomo Wu, DJ Kim, Ann Foxman and Terranova, designers Lucio Castro and Louis Marie Castelbajac, and artists Hisham Akira Bharoocha and Xander Gaines. At the same time, Adidas has mobilized social networks with a competition allowing participants to customize the logo of the brand in their own image and even win their custom Stan Smith.

On January 15, the simple desirable object is releasedin stores but not in any: the Adidas concept stores and some are carefully chosen. The media loved it and the good news has been passed at each stage in the press (http://toutelaculture.com/tendances/mode/stan-smith-dadidas-resurrection-dun-mythe/). As for the price, there was a rebound from 50 to 95 euros. Adidas ‘originals’ gives good lesson in playing perfectly with the rarity card resources…

3) A budget of a prompt digital content for the entertainment and media
According to a study of audit firm PwC, digital spending in cultural and media industries will increase from 56% between 2013 and 2017. So that the digital will represent 87% of expenditure in both Vod & video games. To produce and to manage digital content is a priority and post exponential spending on these sectors. Moreover, the study shows that the channels that bring the content to users change and the mainstream media are no longer necessary to be used. While content can be delivered directly to consumers via Youtube or I- Tunes and Google , Amazon, Netflix and Microsoft create their own content (Amazon creates its own series in partnership with the American channel PBS , Netflix has produced the series House of Cards and Google has invested $ 200 million to create its own TV), content is becoming a very popular asset for serving big brands.